a clown and a priest 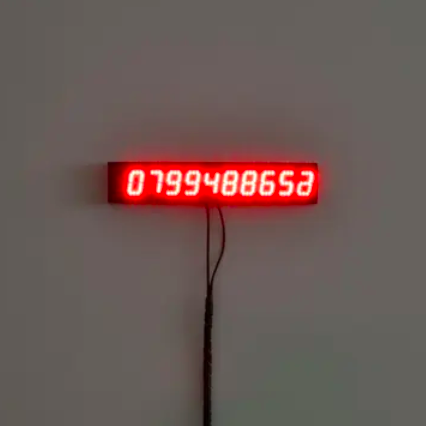 christian boltanski collected his heartbeats and in one of his shows there was a LED display which showed the number of seconds he had been alive. what made the work interesting, and what makes it interesting now that he is dead, is two, or possibly three things.

one, it demonstrates the limits and perhaps the arbitrariness of measuring time since it is impossible to say which specific second 'you' were born; two, the changing LEDs show 'you' hurtling towards your death at an alarming rate; and three, the second LED display showing the number of seconds the museum's youngest employee has been alive. now that the LEDs of boltanski's counter have stopped changing, the other one continues.

In 2009, Christian Boltanski was commissioned by the Australian art collector David Walsh to allow himself to be filmed in his studio, and have a live 24-hour feed transmitted back to Walsh in his native Tasmania. The project incorporated a grisly and complicated bet on the amount of time Boltanski would live, according to which Walsh will have purchased the work — The Life of CB — for more, or less, than it was worth. “I have already won the bet,” he says with quiet satisfaction.

in a typically idiosyncratic blog post about boltanski's death on the MONA website, walsh writes of the night he met christian boltanski : “The world vastened for me that night.” which reminds me of a simpsons word, 'embiggened'.

boltanski once said, as i wrote in my book, that an artist is simultaneously a clown and a priest. this made it possible for me to take both my-so-called-self and my art making less seriously as well as more seriously depending on what was required and how i was feeling at the time.

the effect of boltanski's work on me was not to make the world vaster but to make 'me' smaller — in a good way.