ok so. i got corona.

a few people were interested in keeping abreast of what was happening to me and how i was feeling so i wrote a sort of diary and also to try and keep my-so-called-self more or less sane, since i could think about little else. i also posted a few times every day a single line about the fact that i was still alive with the date and time — á la on kawara — because ... well ... you've got that disease that killed three million people in the last year and stopped the whole world more or less in its tracks.

and bigger than the few people who give a shit about you want to realise because the whole corona thing is too big to contemplate. people would write to me and say : glad to hear it's not severe — and i'd be like, actually you know what IT FUCKING IS SEVERE!

the whole thing lasted exactly two weeks — not including getting a bit of condition back. yesterday a 1.4km walk was quite exhausting, but today a 2.5km walk was much more do-able.

and it was big, bigger than you realise yourself

on the sixteenth of april, the 14th day, i woke up and i thought, it's done! i wrote a thousand words and went for a 2.5km walk before breakfast and was moved to tears by the way the rising sun was playing with the water and i knew that was it.

but what happened was pretty interesting.

first the sort-of diary and then in due course some reflections on what it meant for me and my relation to the disease and to what i might call (with a tip of the hat to the fourteen year old barbara ehrenreich whose astounding memoir 'living with the wild god' i discovered and started reading on day thirteen), the Situation.

it's 11:20 am CET on saturday 3-4-21. i've just received the result of my coronatest and it's positive. i am in isolation for at least the next week.

i'm feeling ok so far, no significant symptoms to speak of, a bit chesty = all. 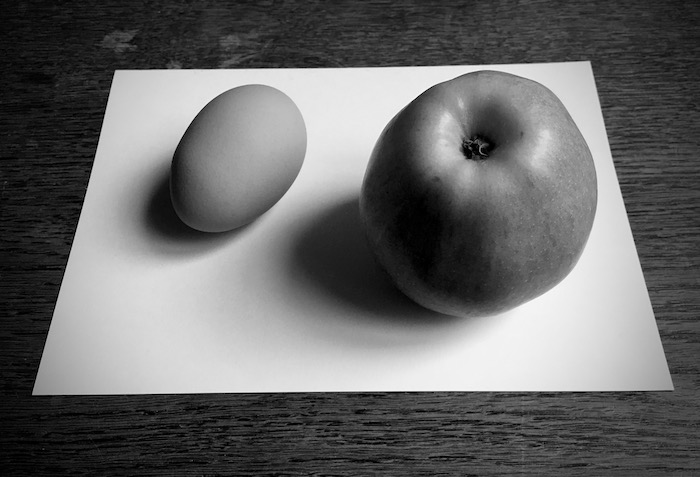 and for an apple and an egg.

when you're in isolation and you have nothing, when people bring you things, your relation to gratitude and generosity changes.

the thing nobody wants

why is sleeping impossible? i am being kept awake by my brain. it's processing something and it won't turn off or slow down enough to allow me to sleep.

the brain has a mind of its own. it thinks, because thinking is what it does. and it's thinking about what it means to have a disease that killed 3 million people, a disease that almost everyone in the whole world has been obsessing about on a daily basis for more than a year. i don't know your position on morphogenetic fields but that's the biggest one in the entire history of human so-called civilisation by a country mile, right there, period.

the brain is thinking about the fact that you've got the thing that seven billion people, without a single exception, don't want.

to begin with, just after the positive test, it was thinking, am i going to be one of the asymptomatic ones? but that didn't last long. late on day zero it was as if i could feel the immune system kicking into gear, producing millions and millions of antibodies. the brain thinks about how fortunate it is that it doesn't have to think about or remember how to make these antibodies.

and then the brain is thinking, i could die. that's not being dramatic, that's just recognising a real possibility. this thing kills people although it's nothing personal : the virus is pure desire.

what is the death rate? it's only actually 1-2%. they should put that in the email when they send you the test result : so. you're positive. but cheer up chicken! it only kills one or two people in a hundred.

but that's overall. the chances of someone between the age of 50 and 64 dying from it are four hundred and forty times those of someone between 5 and 17 — and unfit sixties something men with a BMI of whatever it is not supposed to be no doubt even higher.

i am not afraid to die but the brain thinks : better make sure there is an up to date list of the people who possibly might give a shit so they can be duly informed in case of my untimely demise.

the absolute low point of the whole miserable covid trajectory. the entire day was spent in a catatonic state, the body completely worn out from the struggle. it's like an empty vessel and every part of it is weak and aches; the digestive system is upset, a weird metallic taste in my mouth, and a pounding headache.

a deep depression settles over me. all i can think about, if it can be called thinking, is the utter pointlessness of this virus and what it does to human bodies. i'd woken up thinking : i did it! it feels like it's done. d.o.n.e. the virus is g.o.n.e. which is great and everything but there is zero sense of achievement. the meaninglessness of whole thing seeps into every subatomic particle of the hollow shell which is this body.

i am becoming aware that this process could take a lot longer than i might have allowed my-so-called-self to think in the first few days, perhaps so as not to become too maudlin.

it's now like i live on a different planet where gravity is three times what it is on earth and everything takes three times as much energy which in any case i don't have. for example sitting on a chair as opposed to lying on a bed. sitting in a chair takes a surprising amount of energy because you have to hold your head up and, to some extent, your back upright. yesterday having sat in a chair for twenty minutes seemed like an achievement.

one feels as if one has been (and is being) subjected to a force.

To define force — it is that x that turns anybody who is subjected to it into a thing. Exercised to the limit, it turns man into a thing in the most literal sense: it makes a corpse out of him. Somebody was here, and the next minute there is nobody here at all.

i am resistant to the narrative of the virus being 'defeated', either in or by my body — or in/by 'the world'.

even the very name 'antibody'...

the body responds to the virus and there are responses from other bodies and from the state.

can i speak in terms of the virus becoming enfolded in my body? or of it being undone?

what made day eleven feel like the turning point was that for the first time in nearly two weeks i slept what might be considered for me at least a relatively normal sleep and i might have gone outside and tried a walk but exhausted my pathetic energy reserves by having shower after which had to rest for several hours and descend into a catatonic tearful state with a pounding headache which makes it impossible to think. so come day twelve there was no wasting energy on showering i set out for the supermarket without any idea if i could actually make it there, and if if did, whether i would have the energy to walk back again.

it was momentous being outside for the first time in nearly two weeks. the world seemed very big and i am walking gingerly having little sense of balance. there were many different smells. on the way there were flowers, complicated old school tulips. and i had a chat with hans, a human whom i know slightly, who was working in the garden. it was strangely moving to be talking to an actual flesh and blood person in real time. i told hans i had covid. he asked : what's it like to have it? and i heard my-so-called-self say : it's like a very serious flu — but my brain was thinking, where do you start?

in the usurpermarket i stood in front of the fridge for what seemed like 100 minutes looking at the 100 different varieties of yoghurts available and the entire world disappeared until a voice said gently, would you mind if i just ...

and then i was sucked back into my body.