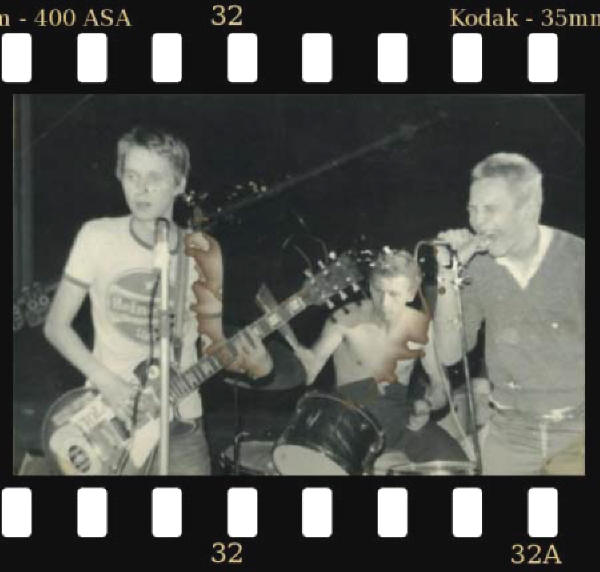 almost everyone wants to hear my story about how in 1977, when i was 19, i was in a punk band in london called the violators and when we played support for siouxsie and the banshees at the roxy on 23rd of march, which was actually the last night of the original roxy, steve their guitarist had to borrow my guitar because there was something wrong with his. there was something wrong with mine too but he didn't find that out until it was too late. it was a cheap les paul copy that wouldn't stay in tune. but no one cared about whether you were in tune. what was important was that you made a lot of noise and that you were young and had attitude. we were scared as chickens but being from a rough part of town we'd learned to hide it well.

the slits were in the audience and shane from the nipple erectors who would later became shane from the pogues. he lost half his ear like vincent van gogh but in his case it was bitten off by a pogoing punk who jumped on him at the roxy. i was in love with viv but it was ari up who went into the roxy toilet and ripped out one of the seats, climbed on the stage and hung it around my neck halfway through our set.

that was andrew's last night. the roxy was handed over to new management the next day. all the punks stopped going there and no one would play there. they offered us a headlining gig. there was hardly anyone there, only some posers who didn't know the roxy was not cool anymore. we only had ten songs and when walked off stage after half an hour, not covered in gob at all unlike the first time we played there, we were told to go back on and just do the set again. they were paying us fifty pounds so we had to do it.

ok so now if anyone asks i will just tell them to fuck off ... i am sorry refer them to this web page because i cannot spend the rest of my life telling this same story over and over again. there are better stories, more relevant and urgent, about now.

except no one wants to know about now. they want to know about the good old days, except they weren't good. they were shit. punk started because life as a young person was shit and everyone was bored.

here are norm's recollections on the punk77 site | archive

and there are a few pics here that capture the atmosphere in the roxy club in its hayday and some of the people that played there quite well.

Had you already been to the Roxy as punters and how did you find out about the place??

If so what were the bands you saw and what were your recollections of them, the place, people, clothes, atmosphere? Before the Roxy gigs were supports in pubs or venues on the pub rock circuit. Did you think at last a punk club for punks?

Everyone seems to say they didn’t notice the girls but I can’t believe that. Some nice punkettes and what’s a club for other than sex and music or was the Roxy different?

there was a lot more blokes than girls i remember that

When you went there was the club cliquey at all?

What was the average age of the band at the time?

How did you come to get a gig there? What was said to you? Did you get any money for the gig? Soundcheck?

norm sent a tape. yeah we did a sound check but they always used to make the support band sound a little bit worse than the headlining act

You supported Siouxsie. Did you have any contact with them and if so how did you find them? Snotty or friendly?

The gig. How did the Violators go down? Reaction, any memorable incidents? You mentioned Ari Up doing something. What was the story there and any others?

Did you stay and watch Siouxsie? Any recollections? The night was being recorded by Don Letts. Were you filmed at all?

we sure did – john had my guitar! they were shit but they looked great of course – siouxie had some serious stage presence. you were scared of her but you wanted to fuck her

Quite a momentous night as it was the night the owners including Andy C were evicted afterwards. Siouxsie made a few announcements from the stage about it urging people not to come back? Do you remember anything about this? Did you know Andy etc were being evicted?

Did the atmosphere seem any different that night?

it was fucking packed i remember that

The club gave bands like yourself the chance to play there? How important do you think the Roxy was to punk?

How come it took you so long to play there again and how did you get the gig?

How had it changed in terms of atmosphere and people? Had punk changed by then? How had the Violators changed?

What were the new owners like? Did you get paid?

we got paid. was it a hundred pounds? norm might remember

Any memorable incidents stand out from either gig you played there?

spitting was big – but you accepted it as a compliment or something. at the siouxie gig i remember waves of spit as we were playing. we were that nervous. having ari up go into the womens toilets rip out one of the toilet seat and walk up on stage and put it around my neck towards the end of the set was something i will never forget – that toilet seat was rank but who cared?

what i did after that

i found this. it's from something i wrote in 2002 for ... something or other when i was an artist/teacher living and working wagga wagga new south wales

i learned to love noise being involved in the london punk scene in 1977 as guitarist in a band called the violators playing the roxy club as support for such luminaries as xtc ; siouxie and the banshees; alternative tv and squeeze (somewhere someone has footage of ari up of the slits being so moved by one of our performances that she went to the toilet ripped out a toilet seat jumped on stage and hung it around my neck as i was playing)

i see the role of linear media like radio and audio cd as affording a snapshot of a dynamic work which continues to shift and change and so it is with returning v2.1 which will be heard in a very different context as an installation running off several vintage computers at the wagga wagga regional art gallery as part of my solo exhibition there at the end of this year

minus eleven error is a member of the wagga space program a collective of sound/visual artists writers and performers based in wagga wagga which has been active since the late 90s – members include : dot matrix ; sleepville ; and the inimitable doug snug – space program have released several cds and organized numerous concerts and performances around wagga wagga including the yearly “unsound” event which has brought to wagga metropolitan performers who don't usually venture into the regions like oren ambachi.